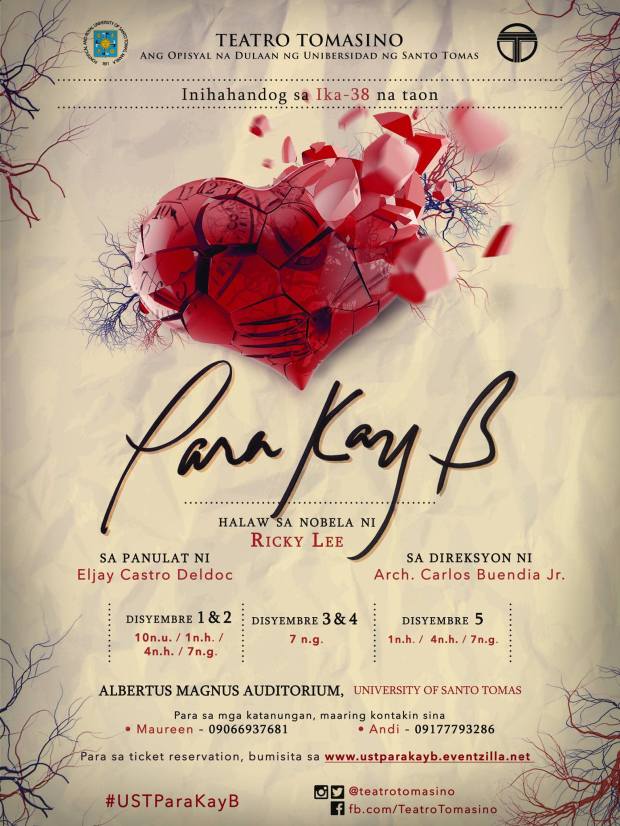 It was in 2008 when I first read “Para Kay B”, the first novel published by notable movie and television writer Ricky Lee. This served as my introduction to his life, his previous cinematic masterpieces and his fruitful wisdom on filmmaking and film writing. Since then, I become his avid fan and always making sure to attend film industry-related events where his works are exhibited.

I’ve read Para Kay B for many times and keep some of its most memorable scenes in my heart and in my mind. So when I learned that the novel will be adapted as a theater play, I couldn’t hide my excitement! I reserved a ticket online just hours after they first announced it in social media. Also fueled by curiosity, I wanted to personally experience how a university-based theater guild can translate my favorite book into life. I chose to watch the final run of the play (December 5, 2015, 7:00pm) because I believe that in any theater play, the last one will be the best of all their performances.

Staged inside University of Santo Tomas’ Albertus Magnus Auditorium on December 1-5, 2015, the theatrical adaptation of Lee’s novel was written by Eljay Castro Deldoc and produced by Teatro Tomasino for its 38th production year under the direction of Arch. Carlos A. Buendia, Jr. It is about five different women who struggled in the name of love. The complicated lives of Erica (Samantha Pizaro), Irene (Leah Zamoras), Sandra (Lyn Carol Garcia), Sara (Mitzi Tayer), Ester (Frances Bean Pan) and Bessie (Iris Montesclaros) are all tailored into five interconnected stories written by Lucas (Angel John Cuartero). He is a frustrated writer who loves collecting stories to prove his theory that in every five people who fell in love, only one will succeed and will become happier. While he writes using his own perspective, he used real people whom he personally encountered as characters to these stories. One of them is Bessie, a prostitute and the girl he admires.

Interestingly, the stage adaptation gave modern-day ambiance without compromising the essence of the novel’s original context. The incorporation of latest funny antics like “hugot” and Vice Ganda-type of humor made people laugh. While our society’s condition today is not that far from the book’s setting, Deldoc and Buendia successfully integrated Lee’s political and social viewpoint from the book to their idea of delivering the message of the story. It might be wrong though, but some people would compare the book to the stage play. For those who already read the book prior to the adaptation, they would notice that the stream of the story was quite different. What’s great here is that the production team flawlessly crafted its own flow and modified some parts, specifically in its ending. I guess it’s not because they just want to create their own version but to give an answer to Lucas’ love theory. This is, I think, their way of giving utmost respect to the author and to the book itself.

The simplicity of the stage design made sense to the entire play. Its curtains were designed to form a heart shape and a platform at the center that looked like the Rizal monument in Luneta. It gave its audience an impression that too much loving can make us “martyrs” who deserve a shrine like heroes. It was also remarkable that the heart opens when the main characters share memories or secrets and closes during love making scenes. The costumes served a bizarre role in the stage play because it did not only classify the importance of each role but also the behavior of each character. Its main characters wore yellow, female characters wore red, male characters wore blue and three actors who played as fathers (one ‘father’ was a priest) wore white. The use of lighting effects added thrill, fun and tension on stage. It helped the audience, especially those who already read the book to visualize the magic of the story in their very eyes. Natural sound effects did not utilize evenly in their respective scenes; however, the background music and soundtrack, mostly played using a string instrument (a violin, perhaps) intensified that roller coaster of emotions on the play’s entirety. Using videos as transition from one sequence to another was a good idea and somehow excites the audience to the next scene.

Most, or if not, all actors during the last stretch of the play performed very well. I just have to make special mentions to Chris Philip Abecia (Jake, Erica’s love interest), Frank Jozseph Escuadro (AJ, Ester’s gay son), and Montesclaros (Bessie). Aside from the fact that they made me laugh and crazy because of their punch lines, these actors definitely exceeded my expectations and gave me more appropriate images to these well-loved characters. Let me also commend the actors who professionally, artistically and discreetly performed their respective ‘daring scenes’ on stage. We can call them brave for doing that stuff inside their beloved school that is conservative and religious.

While the love theory remains a mystery to me after I watched it, Teatro Tomasino’s Para Kay B offered its viewers a choice to continue loving, reach the quota and be that one out of five. Before, I never envisioned this novel as a theater play because it is too magical for a live show. But being a fan of the book did not hinder me from trusting Teatro Tomasino like how Lee showed confidence in their artistry to make this happen. They did not fail me! It was more magical than I anticipated in mind and it was manifested by my fellow audience’s reactions inside the auditorium at that night. It was not ‘bitin’, but because of its huge success, I guess it needs a re-run. And YES, I will definitely watch it again like how I read the book again and again.

Based on the novel “PARA KAY B” by RICKY LEE
Produced by TEATRO TOMASINO
Written by ELJAY CASTRO DELDOC
Directed by ARCH. CARLOS A. BUENDIA, JR.

Cast (in order of appearance):